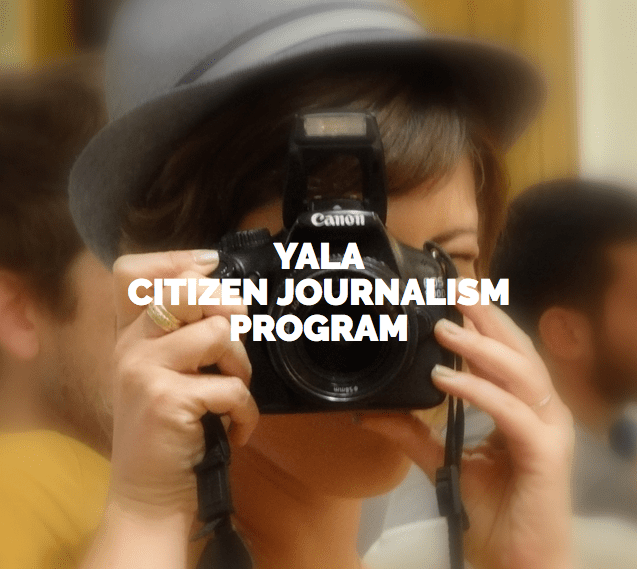 The YaLa Academy’s Aileen Getty School of Citizen Journalism,in partnership with the European Union Peacebuilding Initiative, invites you to undergo a 4-month online training program (starting late August 2017) featuring journalists and new media experts from the New York Times, the Associated Press, Facebook & more! The program will be held in English and participants must come from, or live in, Israel, Palestine or another country in the Middle East or North Africa, and be between the ages of 17 and 36. The program is free and takes place online.

The YaLa Academy’s Aileen Getty School of Citizen Journalism brings together leading journalists and new media experts to train Middle Eastern and African youth in basic journalism techniques, photo- and video-journalism and 21st Century activism. Building upon an initiative launched in 2014 in partnership with the U.S. Institute of Peace, this online program is a unique combination of new media training and peacebuilding experience. In regions where media is too often a tool for nationalism, division and fear, YaLa citizen journalists are being empowered to express themselves and tell a very different kind of story.

The program will train you to become a “citizen journalists” experienced in expressing yourself, telling your stories, writing blogs, taking photos, making videos, using new & social media tools and engaging in cross-border dialogue. The online training program focuses on video lectures by peace practitioners and journalists/experts such as Alan Abbey, founder of Ynetnews; Rina Castelnuovo, photojournalist for the New York Times; Joe Federman, Editor of the Jerusalem Bureau of the Associated Press; John Temple, former Managing Editor of The Washington Post; David Fischer, Vice President of Facebook, and many more!

During the 4-month program, you will be asked to take part in online chat sessions about the video lectures (every other week), to participate in a private Facebook working group where the 4 mandatory assignments are posted and reviewed, and to regularly check your emails. You will be in touch with a Coordinator who will help you work on your assignments and go through the training. Throughout the program, you will learn how to create written and audio-visual content about the issues important to you – such as peace, gender, identity, culture, social justice, coexistence, etc.