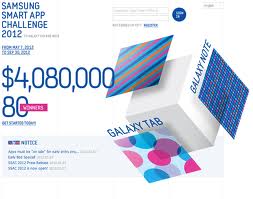 Contest entrants will be divided into two categories: Winning entrants will be rewarded with record-high prize money and a variety of promotional benefits through Samsung’s global channels. They will be given a chance to promote their apps through a variety of social media channels as well as other online and offline platforms such as Samsung Mobile, Samsung Apps and Samsung Developers.

WTO Essay Award 2023 for young Economists (CHF 5,000 Prize & Funded to the annual meeting of the European Trade Study Group at the...