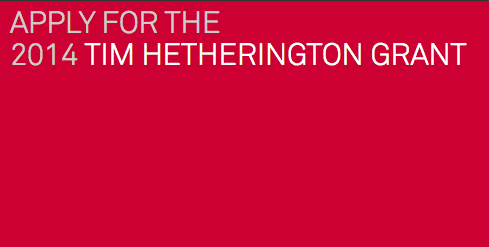 The Tim Hetherington Grant is an annual 20,000 euro grant awarded to a visual journalist to finalize an ongoing project on a human rights theme.

World Press Photo and Human Rights Watch are delighted to invite all photojournalists, documentary photographers and multimedia producers around the world to apply for the fourth annual Tim Hetherington Grant. The grant, worth 20,000 euro, is intended for the support of a visual storyteller in completing an existing project on a human rights theme.

The grant celebrates the legacy of photojournalist and filmmaker Tim Hetherington, who was killed when a group of journalists came under fire during fighting between rebels and General Gaddafi’s forces in Misrata, Libya in April 2011. Tim Hetherington was committed to finding new ways to tell compelling stories about politics, conflict and the human experience, and to relay these stories to a wide audience.

Selection:
The name of the recipient of the grant will be announced in New York City on 10 December.