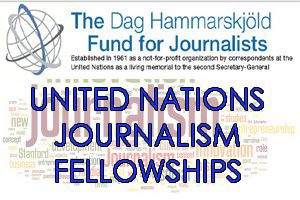 The Dag Hammarskjöld Fund for Journalists is now accepting applications from professional journalists from developing countries for its 2015 fellowship program.

The fellowships are available to radio, television, print and web journalists, age 25 to 35, from developing countries who are interested in coming to New York to report on international affairs during the 70th session of the United Nations General Assembly.

The fellowships will begin in early September and extend to late November and will include the cost of travel and accommodations in New York, as well as a per diem allowance.

The Dag Hammarskjöld Fund for Journalists fellowships are open to individuals who:

1. Copies of representative selections of your work, such as newspaper clippings, audio tapes, video tapes or internet submissions. The selections must be work produced in 2013 or 2014 — not earlier. Entries with insight and originality will be considered most favorably. Investigative work is welcome.

2. Signed letters from two individuals who supervised you and can comment on your journalism experience and qualifications.

3. Endorsement of the Fellowship application from the editor or director of the news organization that presently employs you. This endorsement must be originally signed and should:

4. Summary statement. On a separate sheet of paper, explain in not less than 300 words why you are applying for this Fellowship and what you expect to gain from the experience.

5. Two recent photographs (passport size or larger). Place these photos in a separate secure envelope and affix them to the front of your application. Do not staple the photos directly to the application form.

6. A copy of your passport.