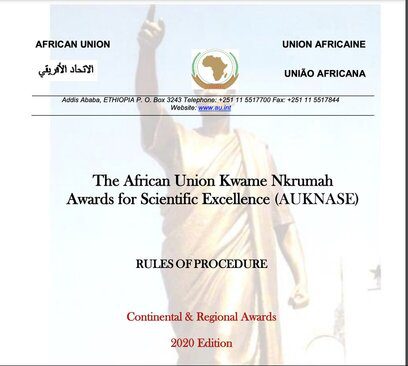 The objectives of AUKNASE are to:

For the purpose of this award the following definitions shall apply:

– Scientific awards are one-time monetary prizes that are given to outstanding African scientists for their scientific achievements and valuable discoveries and findings. They are not lifetime achievement awards;
– Life and Earth Sciences and Innovation[MO1]: embraces all sciences and innovation related to the planet earth, covering (but not limited to) the following disciplines, geology, geophysics and geodesy. On the other hand, we regard Life Sciences to encompass all sciences and innovations that have to do with ‘organisms’, like plants, animals and human and also may be Agro-technology, Animal Science, Plant Science, Biotechnology, Biology, Environmental Sciences, Food Sciences, Medicine, and Tissue Engineering to mention a few;
– Basic Sciences, Technology and Innovation: this category will consist of all other sciences, technologies and innovations excluding those covered within Earth and life Sciences category.

– Nominations will be invited from any institution in the continent, from universities, research institutions, professional bodies, academies, industrial establishments, and so on.
– Nominations may be received from:
– individuals who may be senior staff/academic of the same or higher rank than the nominee;
– Heads of institutions who may have their own formalized procedure for nomination, chairpersons of committees who review the achievements of scientists in their institutions;
– The nominator is required to show the importance and impact of the research of the applicant. The focus will be on the quality of the work and not necessarily the number of publications. The nominator should provide a narrative presentation (up to five pages) of the importance, relevance, quality and impact of the work. A full CV, as well as 5-10 copies of best publications, are to be submitted together with the Nomination Form.
– All successfully completed nominations received will be acknowledged, after the opening by the Jury.

– Technical review of nominations may be performed and any nomination that fail such review will be rejected and nominators notified immediately. All such cases will be meticulously documented and reported at the first meeting of the jury. Only those nominations that are received within the given deadline will be considered.
– A Physical meeting of the jurors will be held to adjudicate and evaluate the nominations.
– The Jury will appoint the Chair for the Session.
– The jurors will hear the reports and discuss their rankings so as to determine the top three candidates for each category of Award;
– The jurors will submit a report of their findings and recommendations to the Commissioner of the AU HRST;
– All juridical processes will be conducted confidentially and each jury member shall sign conflict of interest and confidentiality declarations;
– Timing and Schedule of activities
– The call for nomination will be announced continent wide and will be posted on the African Union Commission website: https://au.int/
– The deadline for receipt of applications for the 2020 Edition will be 25 November 2020, but the Commission reserves the right to extend the deadline to ensure success of the programme;
– The Award conferment ceremony shall take place at an Ordinary Session of the Assembly of Heads of State and Government of the African Union held the year following the launch of the awards;
– Award winners are expected to participate in Africa’s science, technology and innovation efforts following the conferment of the award;
– The award funds may be disbursed by bank transfer or bank draft payable to the recipient after the award ceremony has been held;

Visit the Official Webpage of the AUKNASE Continental Award 2020