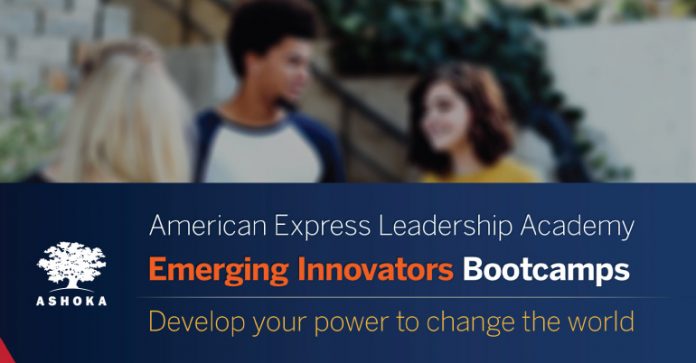 The American Express Leadership Academy Emerging Innovators Bootcamps are 2-3 day intensive trainings for social entrepreneurs and changemakers who can benefit from expert guidance, peer support and a safe space to reflect on inner growth and wellbeing.

How can you use dance to inspire girls to be scientists and mathematicians? Or train refugees as foreign language tutors to increase livelihoods and positive cultural exchange? Or revolutionize the way veterans re-enter the workforce? To bring big ideas like these to life, Ashoka and American Express created the American Express Leadership Academy Emerging Innovators Bootcamps.

The Bootcamps, which happen in New York City, Paris, Mexico City, Nairobi and Dakar over two to three day periods, are intensive trainings for 125 rising social innovators to discuss and analyze best strategies to grow and sustain their social ventures. Twenty-five innovators gather in each of the five locations to receive expert guidance and peer support and to reflect on the inner growth and wellbeing necessary to be a strong leader.

Graduates become a part of the 2,000+ member strong American Express Leadership Academy Alumni Network and have gone on to win prestigious social innovation awards, including the Ashoka Fellowship, and honors from organizations like Echoing Green, Skoll, StartingBloc and Unreasonable Institute. They have also been included in the Forbes “30 Under 30” list.

Since 2013, the American Express Leadership Academy Emerging Innovators Bootcamps have supported a total of 409 entrepreneurs in Mexico, Canada, Europe, the United States and throughout Africa. It is through these kinds of collaborative efforts that American Express and Ashoka continually seek to boost entrepreneurial talent.