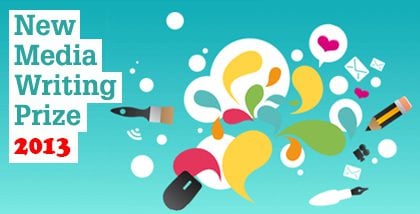 The New Media Writing Prize  encourages and promotes the best in new media writing, and is leading the way toward the future of the ‘written’ word and storytelling.

New media is a broad term for communicating information dynamically and interactively. It is the amalgamation of traditional media such as films, images, music and the written word but with interactive features. Interactivity is enabled through digital means such as computer programs, games consoles, computer hand-held devices, communication technologies and the internet.

Interaction such as online multi-player gaming and social networking (Facebook, Twitter, Blogs, and Wikis) for example, allow users to behave actively instead of passively through creative participation, feedback and community formation.

Anyone can apply! Whether you’re a student, a professional, an artist, a writer, a Flash designer or an enthusiast, the competition is open to all. It’s also an international competition, open to all outside the UK.

There will also be substantial media coverage of the Award, and winners will be given full acknowledgement in all press releases and related material.

How to Submit an Entry:

Visit the Official Webpage of the New Media Writing Prize