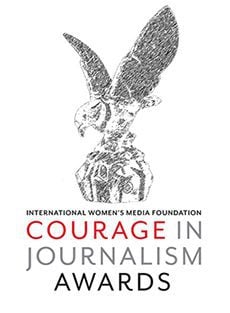 Each year, the Courage in Journalism Awards honor three women journalists who have demonstrated extraordinary strength of character in pursuing their profession under difficult or dangerous circumstances, such as government oppression, threats to personal safety and other intimidating obstacles.
The Lifetime Achievement Award recognizes a woman journalist who has a pioneering spirit and whose accomplishments have paved the way for future generations of women in the media.

Nominations for the 2013 awards must be submitted by March 1, 2013.
Candidates for the Courage in Journalism Awards can be full-time, part-time or freelance women reporters, writers, editors, photographers or producers working in any country.
Digital news media candidates are accepted. Lifetime Achievement Award candidates can be either working or retired journalists.
Nominations may be submitted in English, French, Spanish or Russian. All nomination forms for both the Courage in Journalism Award and the Lifetime Achievement Award must be completed by an associate of the nominee. Self-nominations are not accepted.

Nomination Requirements and Criteria
To learn how to nominate a journalist, visit the IWMF website at iwmf.org/nomination
For more information, contact Alana Barton (+1 (202) 496-1992, [email protected]),

Founded in 1990, the mission of the International Women’s Media Foundation is to strengthen the role of women in the news media worldwide. The IWMF empowers women with the tools, knowledge, and confidence to serve as a prominent voice on global issues.

At the core of the IWMF’s mission is the belief that no press is truly free unless women have an equal voice.

The Pulitzer Center Rainforest Journalism Fund 2020 for Journalists working in the Congo Basin.