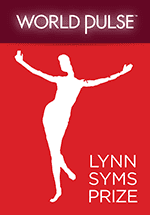 World Pulse is honored to partner with sculptor and philanthropist Lynn Syms to announce the inaugural Lynn Syms Prize. In 2014, the prize will be awarded to an outstanding grassroots woman and visionary voice using digital tools to effect change and advance her community work.

The Lynn Syms prize will recognize a relatively unknown woman activist with an exceptional track record of early accomplishment in community based work to systemically address a pervasive problem faced by women around the world.

The prize is targeted for a grassroots woman leader based and working primarily in a developing country and having a demonstrated ability to elevate community concerns and serve as an inspiration to community leaders elsewhere.

She must have an established organization, program or project, though in the early stage of development.

Characteristics this woman leader should embody include: courage, commitment, integrity and the ability to communicate effectively for her cause.

The prize will include the 2014 Lynn Syms Prize title, a $20,000 monetary prize to be paid out over two years to support her community based work, a feature profile on WorldPulse.com, and an all-expense paid trip to speak her message in New York City.

In order to be eligible for the prize, you must submit three written journal entries to World Pulse’s 2014 Women Weave the Web Campaign before August 13.

Once you’ve submitted to the campaign, you can fill out the Lynn Syms Prize Application.

Visit the Official Webpage of the Lynn Syms Prize