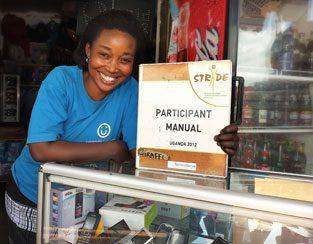 TechnoServe is partnering with The MasterCard Foundation to help rural young people ages 18 to 30 in East Africa transition to economic independence.

The MasterCard Foundation and TechnoServe have announced a five-year, $25.9 million partnership to generate increased income and economic opportunities for 48,000 young people in rural East Africa.

Building on the success of their Strengthening Rural Youth Development through Enterprise (STRYDE) program, the expanded STRYDE 2.0 initiative will provide young people in Kenya, Rwanda, Tanzania and Uganda with the skills to start small businesses, secure formal jobs or explore opportunities in agriculture. The new program is noteworthy not only for its scope, but for its partnerships with local institutions to ensure sustainability.

The STRYDE programs address the significant problem of unemployed or unengaged youth in Africa, where more than a quarter of young people ages 15-24 are neither working nor studying. At the same time, since the average age of the African farmer is around 60, there is urgent need to involve young people in agriculture in order to ensure food security.

The first STRYDE program began in August 2011 and this month exceeded its target milestone of 15,000 youth trained. After participating in this first program, young people increased their incomes by an average of 233 percent, with 70 percent now saving regularly – a sevenfold increase from before the training.

While a growing number of rural youth are migrating to cities, 70 percent remain in rural areas. Those who stay often lack the skills and knowledge necessary to capitalize on available opportunities. In the long term, youth unemployment can hinder economic growth and lead to political and social unrest.

In 2011, TechnoServe and The MasterCard Foundation partnered to help rural young women and men in East Africa transition to economic independence through the Strengthening Rural Youth Development through Enterprise (STRYDE) program.

In the first phase of the program,  STRYDE delivered a comprehensive package of services including skills training, business development and mentoring to young people ages 18 to 30 in Kenya, Rwanda and Uganda. It aimed to equip 15,000 rural youth by 2015 with the skills and knowledge necessary to capitalize on economic opportunities and increase their incomes, with the ripple effects benefiting more than 67,000 family members.

The second phase of the program, STRYDE 2.0, is based on the successes and lessons learned from the first phase. STRYDE 2.0 will work with an additional 48,015 youth and include new geographies, expanding into Tanzania and new districts in northern Uganda. Launched in August 2014, this phase will run through July 2019.

A key component of the STRYDE 2.0 model is sustainability. The program will develop the capacity of system actors – local public and private sector partners – to enable them to take on key functions of the model so that the impact can be sustained after the end of the five-year program. Nearly 40 percent of the participants in STRYDE 2.0 will be trained by partner organizations. To ensure quality delivery of these trainings, partner organizations will be trained and their delivery and impact monitored.

The key objectives under STRYDE 2.0 are: