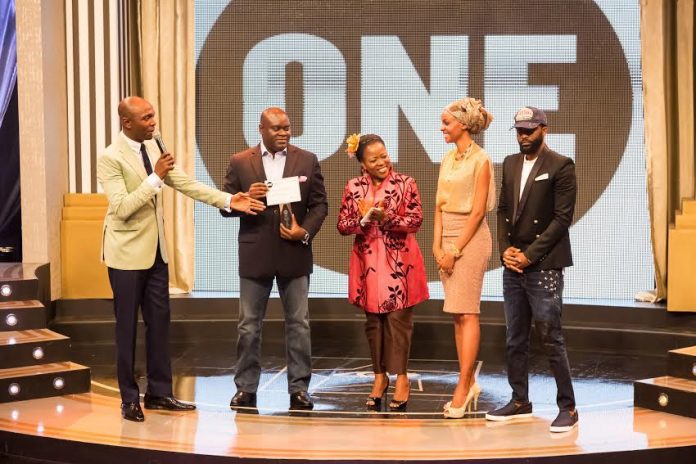 JOHANNESBURG, December 1– The ONE Campaign on Sunday 30  November, unveiled Nigeria’s Friends of the Global Fund as the winner of the $100,000 ONE Africa Award, 2014. The award was presented to Friends Africa representative, Didier Touré,  by ONE Africa Executive Director, Dr. Sipho S. Moyo during the Big Brother Africa Hotshots live eviction show in Johannesburg.

Joining Dr Moyo on stage to announce the winner and present the award  was former Miss Universe and UN Goodwill Ambassador for Youth and HIV/AIDS, Mpule Kwelagobe and African pop star Fally Ipupa. The ceremony was hosted by Big Brother Africa’s I.K. Osakioduwa.

Each year, The ONE Campaign awards the prize of $100,000 which is underwritten by an endowment from The Howard G. Buffet Foundation to recognize and reward the exceptional work of an African organization that works toward the achievement of one or more of the Millennium Development Goals. The award is in its seventh year running.

Friends Africa  is one of Africa’s leading health advocacy organizations that work with governments, the private sector, the international  community and community-based organizations on mobilizing political  and financial support for the fight against HIV/AIDS, TB and Malaria.

“This year, over 120 impressive organizations from 22 countries applied for the ONE Award. I wish to congratulate Friends Africa for the outstanding work they do and for this well-deserved  recognition. Through partnerships, innovation and proactivity, they continue to make an excellent contribution to the fight against preventable diseases in Nigeria and in Africa,” said Dr. Sipho Moyo.

“It is indeed befitting that this award came on the eve of  World AIDS Day. According to ONE’s World AIDS Day report,  released today, 38% of people living with HIV and 36% of deaths in  Sub-Saharan Africa are from Nigeria and South Africa alone.  This  makes the work of Friends Africa even more important, and we hope  that this award will empower them to step up their fight towards an HIV/AIDS-free Africa.”

CEO and Founder of Friends Africa, Dr Akudo Anyanwu Ikemba, said: “On behalf of the entire team and board of Friends Africa, we are  delighted and humbled to finally receive this award. This is the third  time we have qualified as a finalist and we are thankful to the ONE Africa team for recognizing our efforts and that of our numerous  partners on ensuring a HIV-free African continent. We are indeed inspired to do more.”