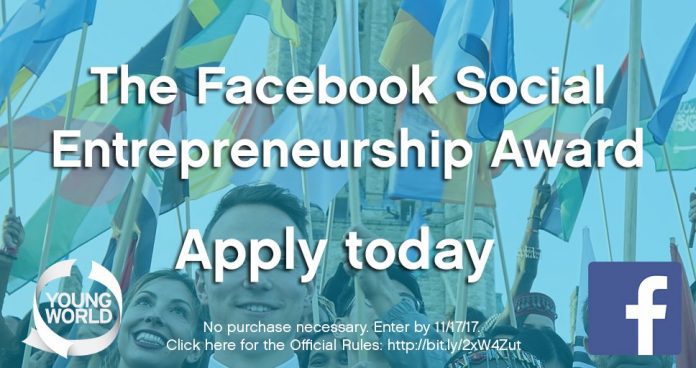 Facebook is the world’s largest social network and connects over 2 billion people monthly. As part of its mission to give people the power to build community and bring the world closer together, it connects people on the platform with over 70 million businesses. Facebook not only helps businesses get discovered and find customers, but also helps people develop connections to products and causes. To better support cause-driven businesses, Facebook has partnered with One Young World to launch the Facebook Social Entrepreneurship Award.

On 5 October at the One Young World 2017 Summit in Bogotá, Colombia, Facebook’s VP of Global Marketing Solutions, Carolyn Everson, announced the Facebook Social Entrepreneurship Award and officially announced the opening of applications for One Young World Ambassadors to apply. In line with the company’s mission, the award will present a prize to 4 teams or individual social entrepreneurs with advertising credits and Facebook mentors who will share marketing expertise.

Regional Prize: The Participant with the highest score in their respective Regions (as described in The Finalist Entry Period and Judging Phase subsection above), subject to verification, will receive the following prize package: (i) Facebook ad credit in the amount of Five Thousand US Dollars (US$5,000.00) and (ii) access to a mentor who works with/for Facebook which has no ARV. The total ARV is five thousand U.S. dollars (USD$5,000).

Grand Prize: The Participant with the highest score in the Grand Prize Award Judging (as described in The Finalist Entry Period and Judging Phase subsection above), subject to verification, will receive the following prize package in addition to the Regional Prize: (i) Facebook ad credit in the amount of Fifty Thousand US Dollars (US$50,000.00) and (ii) access to an additional mentor who works for/with Facebook which has no ARV. The total ARV is fifty thousand U.S. dollars (USD$50,000)

The Facebook Mentors will also serve as judges for the Prize Winners.

Candidates will be assessed based on:

Visit the Official Webpage of the Facebook Social Entrepreneurship Award