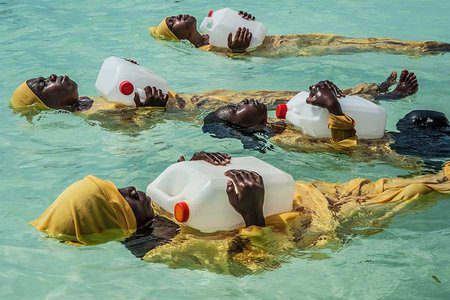 The Alfred Fried Photography Award recognizes and promotes photographers from all over the world whose pictures capture human efforts towards a peaceful world and the quest for beauty and goodness in our lives. The award goes to those photographs that best express the idea that our future lies in peaceful coexistence.

The Alfred Fried Photography Award, launched in 2013, fills this gap: it shows the various facets of peacefulness. It completes the image of humans by adding their good sides. It honours the pictures which tell about successes rather than failures; of empathy rather than hatred; of things worth preserving rather than destruction; of encouragement rather than agony; and of the human right to beauty.

The international Alfred Fried Photography Award for the best photo of peace is not an award for escapism, wildflower meadows and sunsets or an award for the sweetest smile, nor does it criticize the informative reportage photography which by nature depicts the misery of our world. It is, however, an award which encourages professional photographers to visualize on the highest level what inspires hope: from private efforts to support refugees to meaningful development aid; from pictures of personal happiness to examples of community spirit; from fighting poverty to a successful nature conservation project; from permitted withdrawal to peaceful niches to an enthusiastic rebellion against injustice; from important advances in medicine and in environmental protection to the reconstruction of cities in ruins.

The Alfred Fried Photography Award celebrates the ability of humans to be caring and supportive. Named after Alfred Fried (1864 to 1921), the Austrian Nobel Peace Prize holder, it celebrates all kinds of pacifism and disarmament of individuals and society as a whole.

The Alfred Fried Photography Award is open to all photographers from anywhere in the world.