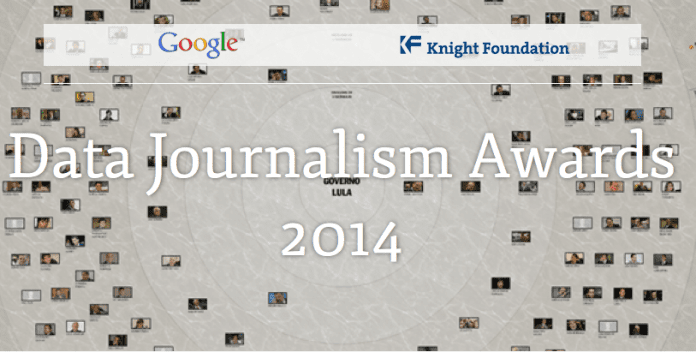 The Data Journalism Awards rewards outstanding work in the field of data journalism in any media worldwide. They reward examples of data driven investigations, data driven applications and storytelling with data visualisation, which cover matters relevant to society and aim to have an impact at a societal level.

Data Journalism Awards (DJAs), run by the Global Editors Network (GEN) and sponsored by the Knight Foundation and Google, awards EUR16,000 (US$21,990) prize to be shared among eight winning entries.

▪   Media companies, non-profit organisations and freelancers or individuals are all eligible for the Data Journalism Awards.

▪  Works produced by individuals or teams of staffers from media companies and non-profit organisations, as well as freelancers or individuals are all eligible for entry.

▪     Works that are the result of a collaboration between organisations may also be submitted.

▪  Those works produced by staffers or freelancers collaborating with government agencies, business or trade organisations with a stake (financial or of other nature) in the issue at hand are not eligible.

▪    Works that include significant input from the members of the jury will not be accepted for entry into the competition.

1. Best story or group of stories on a single topic, online or print, in which collection and analysis of data are a leading factor. A maximum of five elements – stories and data presentations – per entry. €2,000 Prize

2. Best data-driven investigation, which uses data collection and analysis to disclose or spotlight a significant abuse of power or failure to uphold the public interest. A maximum of five elements – stories and data presentations – per entry. €2,000 Prize

3. Best journalistic data visualization (most impressive, novel, compelling display) on a single theme. May be self-contained or combined with a story, but must accomplish a journalistic purpose and use data significantly. A maximum of three elements per entry. €2,000 Prize

4. Best data journalism application or website, in which interactivity is important and the project provides both explanation of the topic and an opportunity for users to explore the topic and create their own story. A maximum of five elements per entry. €2,000 Prize

5. Best data journalism portfolio by an individual. A maximum of five elements, on a single topic or on multiple topics, per entry. €2,000 Prize

6. Best data journalism portfolio by a team or newsroom. A maximum of 10 elements, on a single topic or on multiple topics, per entry. €2,000 Prize

7. Best entry from a small newsroom, with fewer than 25 journalists, not otherwise honored in this competition. €2,000 Prize

8. Jurors’ choice, an entry of high excellence not otherwise honored in this competition. €2,000 Prize

Timeline of the Data Journalism Awards 2014

8 May 2014: announcement of the nominees by the DJA pre-jury

12 June 2014: announcement of the winners by the jury at the GEN Summit in Barcelona, Spain

Submit your Entry for the Data Journalism Awards

Visit the Official Webpage of the Data journalism Awards