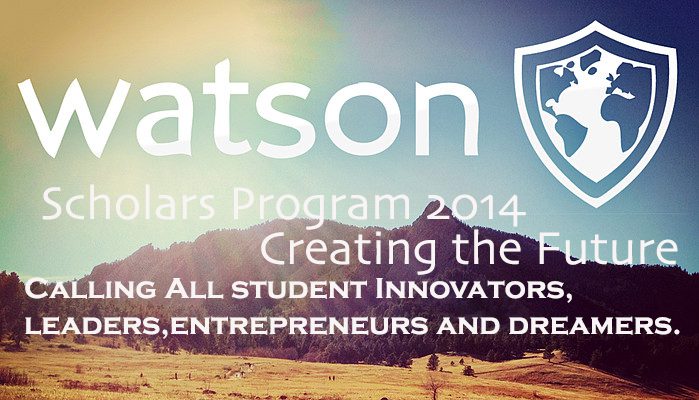 Calling all student innovators, leaders, entrepreneurs, and dreamers: Applications are open for the Spring 2014 semester at Watson. The theme of the application is: Creating the Future.

Watson is a semester long accelerator in Boulder, Colorado for student innovators, leaders, and entrepreneurs that includes mentorship and short courses from some of the world’s foremost practitioners including a leader of the Nobel Peace Prize winning international campaign to ban Landmines, seasoned entrepreneurs, and a Time Magazine Hero of the Planet; award winning training in the skills of empathy, creativity, teamwork, leadership, and resilience inspired by Transformative Action Institute; the Watson Laboratory in which students receive personalized coaching, mentorship and build partnerships to pilot, prototype, and scale ideas that will shape the future.

The life of a Watson Scholar includes:

Watson is built on the belief that the university should be a place for students to accelerate ideas that will shape the future; receive mentorship from the world’s foremost leaders, entrepreneurs, innovators, and thinkers; and where the investment students make in their education is not only affordable, but will also pay off the rest of their lives.

1. 15 short Master Courses taught by a select network of practitioners ranging from a leader of the Nobel Peace prize winning International Campaign to Ban Landmines, to a Time Magazine Hero of the Planet, and transformative entrepreneurs
2. Award-winning training in empathy, creativity, resilience, grit, teamwork, leadership, and entrepreneurship inspired by Transformative Action Institute

3. The Watson Lab, where students pilot, prototype, and scale ideas

Full and partial scholarships for tuition and housing, as well as innovative financial assistance options are available from Watson. If a student is accepted as one of the 15-20 Scholars after completing the competitive application process, Watson is  committed to ensuring he or she can afford Watson regardless of financial ability.

Visit the Official Webpage of the Watson Scholars Program