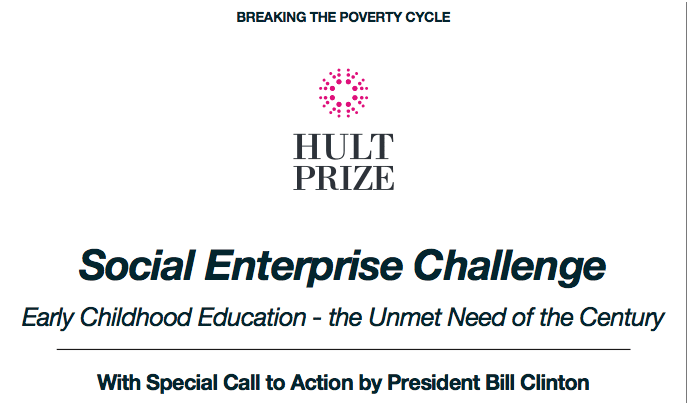 Regional Rounds of competition will be held in Boston, San Francisco, London, Dubai and Shanghai on March 13-14, 2015. How will you change the world with US$1,000,000 in seed capital to scale your start-up?

Moving forward with the sixth annual Hult Prize, thousands of university students worldwide will team up to create start-ups aimed at solving an issue faced by billions in need. More than 10,000 applicants will begin the journey, and only 300 start-ups from around the world will move on to pitch their start-up ideas at one of five global locations, including: Boston, San Francisco, London, Dubai and Shanghai.

A sixth regional final will be held on-line following the completion of the five in-person regional final events. Up for grabs is the coveted Hult Prize which comes with US$1,000,000 in start-up funding.  While there is only one winner, each regional champion will get to spend the summer inside of the Hult Prize Accelerator —an innovative incubator for social enterprise and will receive a one year membership into the CGI.

Form a team of 3-5 students from your university and submit an application to participate at any of the five regional finals locations held in: Boston, San Francisco, London, Dubai and Shanghai

Visit the Official Webpage of the Hult Prize 2015