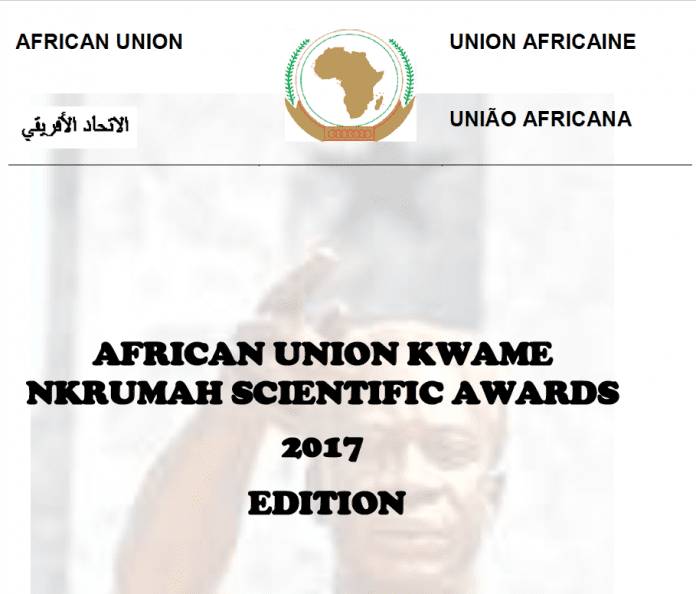 With the support of its Development Partners particularly the European Commission, the African Union Commission, launched on 9 September 2008, the prestigious African Union Scientific Award Programme. The programme is implemented at national level for young researchers, regional level for women scientists and continental level open to all scientists. The Continental level is the highest and level of the programme. The objective is to give out scientific awards to top African scientists for their scientific achievements and valuable discoveries and findings.

In July 2010, the African Union Heads of State and Government took a decision to rename this Programme as “African Union Kwame Nkrumah Scientific Awards”. This decision reflects and underscores a success story and the critical role of science and technology in the development and integration of Africa. It also offers us the opportunity to constantly honour the memory of the Great Pan-Africanist and First President of the Republic of Ghana, Dr. Kwame Nkrumah.

A firm believer in African liberation and unity! A man who pursued a revolutionary pan-African policy, with a strong vision extending beyond national boundaries, for the creation of a new Africa, “a federal union of African states”, to take charge of its own destiny. He is among the key founding fathers of the then Organization of African Unity in 1963, an important pan-Africanist organization, which later become the African Union in 2002. Today the “dream and determination” of Dr. Kwame Nkrumah inspires Africa in all facets of development.

Under this programme prizes are awarded to top African scientists in each of the following two sectors (a) Life and Earth Science; and (b) Basic Science, Technology and Innovation at the national, regional and continental levels. The African Union Kwame Nkrumah Scientific Awards Programme is implemented using the following rules of procedure.

One award per each of the following scientific sector shall be given out at each level:
a) Life and Earth Sciences; and
b) Basic Science, Technology and Innovation
NB: The sectors are defined in 2 above.

The Application forms are available from:

For any enquiries and or clarifications, please contact the secretariat of African Union Kwame Nkrumah Scientific Award Programme.

For equal treatment answers to various questions will be posted on the AU Commission official website for this programme:v- E-mail: [email protected]