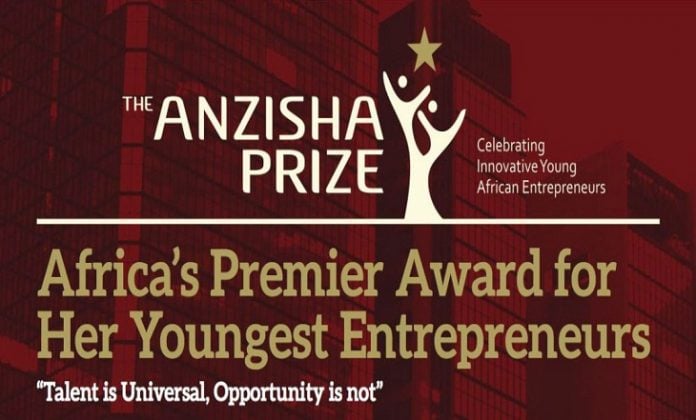 African Leadership Academy and The MasterCard Foundation are pleased to announce Heritiaina Randriamananatahina, 22 year old agriculture entrepreneur from Madagascar, as this year’s winner of the $25,000 Grand Prize in the sixth annual edition of Africa’s premier award for youth entrepreneurship.

Heritiaina is the founder of Fiombonana, an agro-processing enterprise that manufactures dairy products and confectioneries using only Malagasy raw materials, employing farmers and providing local job opportunities. Heritiaina was selected from a competitive pool of diverse entrepreneurs from all over Africa. For the first time ever, Anzisha Prize is pleased to award one of the top prizes to a finalist from Madagascar, creating a truly pan-African network of entrepreneurs who represent Africa’s best youth entrepreneurs.

This year, Anzisha Prize celebrates increased representation of winners from francophone countries. The first runner-up was

The presence of two agriculture entrepreneurs in the top three is emblematic of the important role agriculture plays in Africa’s economies. Agriculture represented the sector with the largest share of applicants for the prize this year. The Agriculture Sector Prize was also claimed by N’guessan Koffi Jacques Olivier who demonstrated the potential for agriculture to create jobs for youth.

As the grand prize-winner, Heritiaina impressed a pan-African panel of judges with his venture response to a real need within his community, effective business model, job-creation potential, scalability, and demonstrated leadership potential. Fiombonana has enjoyed significant success to date including sizeable growth as Fiombonana produces 800kg of cheese a week, with potential for rapid and low cost expansion due to innovations such as reverse-engineering machinery for food processing.

“I am so excited to win the Anzisha Prize for 2016, even though I had to drop out of school when I was in grade six. My hard work in my business is paying off. I appreciate the training I have already received so far. Now that I have won, I will invest in my own education and grow my business,” says Heritiaina.

The first runner up for the prize, Yaye Souadou from Senegal and founder of E-cover, is also the first Senegalese entrepreneur ever in the top three in the history of Anzisha Prize. The core need the venture meets is to repurpose the many discarded tyres that are available in her home city, Dakar, into multi-purpose tiles for paving playgrounds, pavements, roads, and other surfaces. Yaye believes that youth can be agents of change to solve the problems that Africa faces and can drive pursuit of opportunities for economic growth. Her win will enable her to build the production capacity that her venture desperately needs in order to meet customer demand.

N’guessan Koffi Jacques Olivier from Cote d’ Ivoire is the remarkable second runner up who founded Yaletite Entrepreneurship Group CI. Yaletite Entrepreneurship Group CI is an agricultural group with the aim of producing and selling chocolate and food crops for profit and mobilizing youth for agricultural employment. It is unique for the manner in which Koffi operates his farm, through modern methods to ensure maximum yields during processing. Koffi has managed to tirelessly pursue this innovative venture, and create employment for 35 people. Koffi creates improved livelihoods for over 100 households through access to innovative farming practices.

The Anzisha Sector Prize in Agriculture was also awarded to N’guessan Koffi Jacques Olivier. The Anzisha Prize in Agriculture is offered with the sponsorship of the Louis Dreyfus Foundation , which promotes projects in the areas of sustainable agriculture, food security and self-sufficiency, particularly through education and direct support to farmers. The Louis Dreyfus Foundation Award for Entrepreneurship in Agriculture was offered for a second year this year, and aims to recognize young African entrepreneurs who are making a sustainable impact in the agriculture sector.

The MasterCard Foundation continues to support both entrepreneurs and the Anzisha Prize support program that the entrepreneurs will now access. “Joining the ranks of the Anzisha Fellows, this impressive group of young men and women are igniting the entrepreneurial spark in young people across Africa,” said Koffi Assouan, Program Manager, Youth Livelihoods at The MasterCard Foundation. “This ripple, the #AnzishaEffect has the power to transform the continent as these young entrepreneurs rise to become the next generation of African movers and shakers.”

“Anzisha Prize is a truly inclusive and pan-African Prize. The program is run in a multi-lingual learning environment in which entrepreneurs can learn regardless of their preferred language of instruction such as Arabic, French, Portuguese, and even Malagasy this year. The entrepreneurs really represent the true cream of the crop from the entire continent,” says Grace Kalisha, Program Manager for the Anzisha Prize.

The Anzisha Prize is a partnership between African Leadership Academy and The MasterCard Foundation. The 12 Anzisha Prize finalists were hand-picked from an applicant pool of 550 entrepreneurs from 32 African countries. Now in its sixth year, Anzisha Prize celebrated these outstanding young people at an exclusive, invitation-only ceremony on Tuesday 25 October 2016 in Johannesburg. The 12 finalists presented their ventures to a panel of judges after spending ten days in a business accelerator camp to strengthen business fundamentals. They join a now 67 strong pool of Anzisha Fellows and will receive ongoing business-consulting support, access to experts, and access to networking opportunities to enable sustainable venture growth.