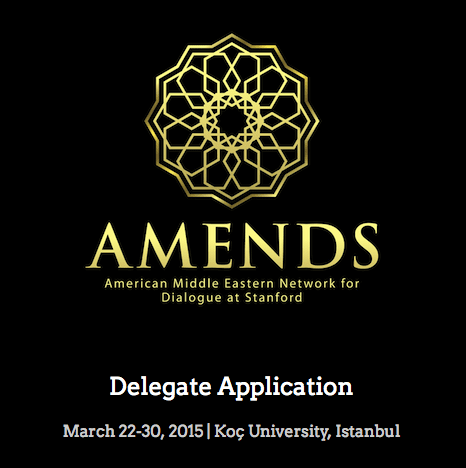 America Middle Eastern Network for Dialogue at Stanford (AMENDS) is a student initiative at Stanford University that brings together the most promising youth change agents from across the Middle East, North Africa, and United States to learn from each other, connect with global leaders and resources, and share, through TED style talks, their ideas and experiences with the world

The AMENDS Summit is a five-day gathering at Stanford University of exemplary youth leaders from all across the Middle East, North Africa, and United States. Through collaboration, networking, and leadership training, the Summit seeks to create lasting solutions to pressing challenges and a global network of the most promising change agents in the United States and MENA region.

The delegates collaborate on their social, political, and economic initiatives, participate in workshops on team-building and social entrepreneurship, engage with world leaders in networking events, and present their AMENDS Talks to their fellow youth leaders and the Stanford community.

In turn, AMENDS hope to help promote greater understanding and respect between the regions, and create a generation of world leaders who can solve problems through international collaboration.

Apply Now for the AMEND Summit 2015