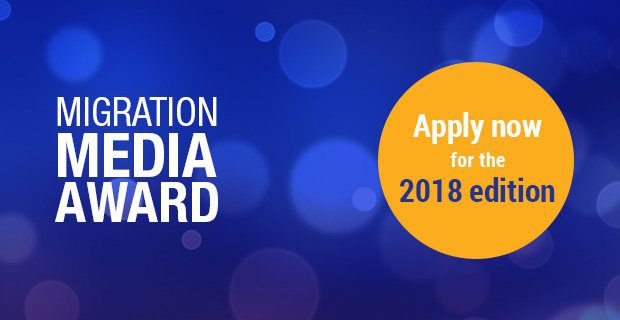 The Migration Media Award funded by the European Union, hosted over 35 winning stories in the 2017 edition showcasing journalistic excellence on migration in the Euro-Mediterranean region.

In line with the quality and number of applications received last year,  this year’s edition will reward up to 48 published stories resulting from time-intensive, un-sensationalistic, in-depth reporting and contributing to balance the narrative on migration, making it, evidence based, nuanced and less polarising. The awards will consist in funding from 750 to 7000 euros towards the production of a second story.

Journalists or media houses based in either EU countries or EU South Partner Countries are eligible to apply by submitting an already published journalistic work along with a proposal for a second production. Both productions, actual and intended, need to address one or more of the following themes in the Euro Mediterranean region:

Candidates who wish to apply must respect the following criteria: The submitted story must have been published between 15 April 2017 and 15 May 2018. The content of the entry must be related to one of the four themes mentioned above on migration limited to the Euro-Mediterranean region.

The 2018 edition will accept only mid-length to long formats. The award scheme foresees a first, second and third prize for each category, and for each of the three eligible languages Arabic, French and English (with exclusion of photos), i.e. up to 48 winners. Awards will amount from 750 to 7000 euros. Please see further below for more details on languages and their eligibility.

The competition is open to all media outlets and journalists based in countries on both sides of the Mediterranean who have produced journalistic work on the topic of migration. Entries may be submitted by a Media organisation but the prize will be awarded to the journalist who created the work. Thus, the contract for the 2nd production will be either with an individual journalist or with the Media organisation while the 2nd production itself will need to be carried out by the journalist winning the award. Journalists based in the following regions and countries are eligible:

In order to participate, you need to submit a complete entry; only entries with the following five mandatory elements will be considered complete and will be eligible:

Please note that candidates may not submit a story already supported by the MMA 2017.

In accordance with EU regulations, prizes will be awarded up to a maximum of 7 000 Euro.

The winning applicants will be offered a contract for work on a second production to be supported by a specified financial amount in accordance with the information further below. Once agreed, all award winners will be confirmed and publicly announced. In each category and language, first and second prizes will always be more than second and third prizes, respectively.

Visit the Official Webpage of the Migration Media Award Competition 2018