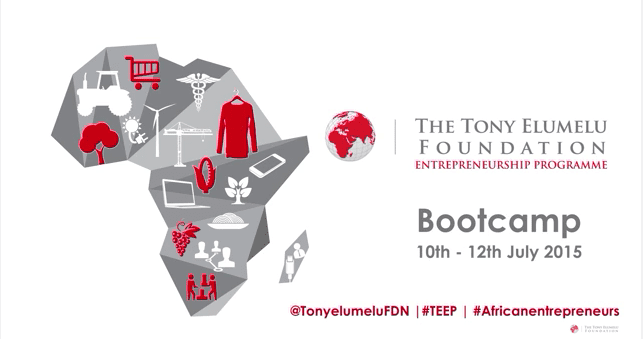 I am confident that these entrepreneurs are Africa’s hope for the future,’ Mr. Tony Elumelu says, about the 1000 African entrepreneurs who will be arriving in Nigeria on July 10th, 2015 for a two-day boot camp.

A thousand entrepreneurs selected from over 20,000 applicants from all over Africa are expected to converge in Nigeria for a two-day boot camp session. This will be the maiden boot camp of thec, a $100m Pan-African entrepreneurship initiative. The event will take place from July 10 -12, 2015 in Ota, Nigeria.

In what is billed to be the largest ever gathering of emerging entrepreneurs on the continent, the boot camp –  which is a major milestone of the flagship programme of the Tony Elumelu Foundation (TEF) – will see an interaction between established entrepreneurs from different sectors of industry, and the 1000 selectees of TEEP.

Mr. Elumelu who has been vocal about entrepreneurship-led development and the push for a private sector-driven turnaround of Africa says,

“In empowering these emerging entrepreneurs, we are providing the capital, the networks, the training and support for them to drive economic and social transformation throughout Africa, providing solutions to its problems as well as securing their future and that of generations to come.”

In the build-up to the boot camp, the Tony Elumelu Foundation has engaged the emerging entrepreneurs in a 12-week online training programme that culminates in this thrilling two-day session. The boot camp format will be predominately plenary style sessions from speakers with proven track record in business and leadership. The entrepreneurs will participate in sessions including an open mic with Founder Tony O. Elumelu CON and other captains of industry.

Speaking on the ideals of the programme and the need for the training, Parminder Vir, CEO of the Tony Elumelu Foundation says,

“We are excited to be pushing the envelope and providing a springboard for this set of emerging African entrepreneurs to take over the world with their innovative ideas, beginning from their local communities. At the end of this boot camp, we want them to have come, seen and be transformed into full-fledged entrepreneurs and ambassadors for Africapitalism.”

The winners represent 51 African countries and territories, as well as a multitude of value adding sectors ranging from agriculture to education to fashion and ICT.

All five African regions – North, East, Southern, Central and West Africa are represented, as well as every state in Nigeria. Additionally, all major language blocs – Anglophone, Francophone, Lusophone, and Arabic Africa.  More than anything else, they epitomise the opportunity and promise of Africa.