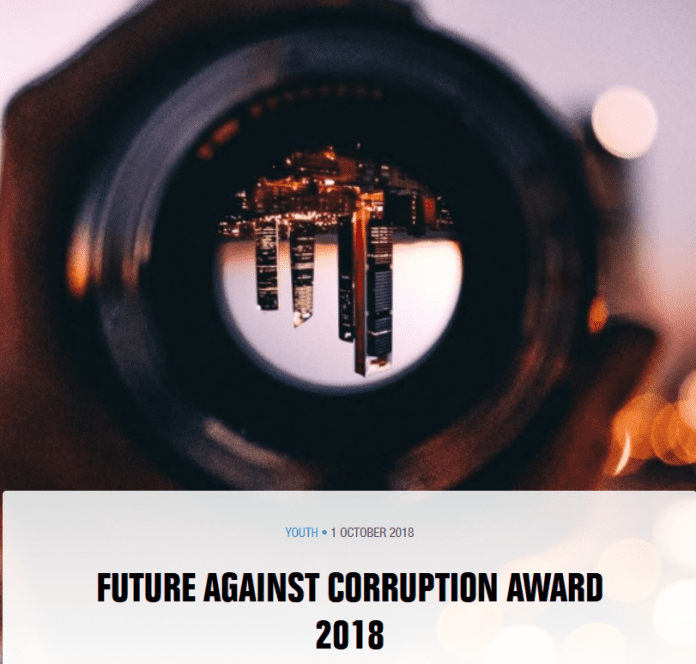 People between the age of 18 and 35 are invited to submit a short video clip presenting their idea on new ways to fight corruption.

Since 1993, Transparency International (TI) has been leading the fight against corruption worldwide, working in more than 100 countries as part of a broader global movement. What TI’s work has consistently proven is that corruption can be challenged.

TI is calling on young people across the globe to join the anti-corruption movement and be a source of inspiration in the fight against corruption. The innovative drive of young people advocating for fairer and more equal societies around the world can be a huge asset to our growing movement. Now is the time to end corruption.

In light of Transparency International’s 25th anniversary and the International Anti-Corruption Day on 9th December 2018, TI is collaborating with the German Federal Ministry for Economic Cooperation and Development (BMZ) to honour young people from all over the world who challenge corruption through their innovative and inspiring ideas.

People between the age of 18 and 35 are invited to submit a short video clip presenting their idea on new ways to fight corruption.

The FutureAgainstCorruption Award may be conferred to activists from all walks of life. Three Finalists will be selected out of the submitted entries by the general public as well as the FutureAgainstCorruption Award Committee. In choosing the recipients, the need to recognise efforts in diverse fields of civil society and the acknowledgement of anti-corruption initiatives throughout the world will be taken into consideration. The competition will consist of two entry streams: Global and Africa. Two Award recipients will be selected from the global stream and one from the African stream.

Participants must meet the following requirements:

Interested individuals should upload their innovative idea against corruption in the form of a short video clip (maximum 60 seconds) on their individual Youtube channel and in addition, send an email to [email protected] with the following information:

The deadline for submission is 30 October 2018.

The competition winner will also have the chance to discuss with the relevant National Chapter and the local German Cooperation office about ways of putting into practice the ideas featured in the winning video entry.