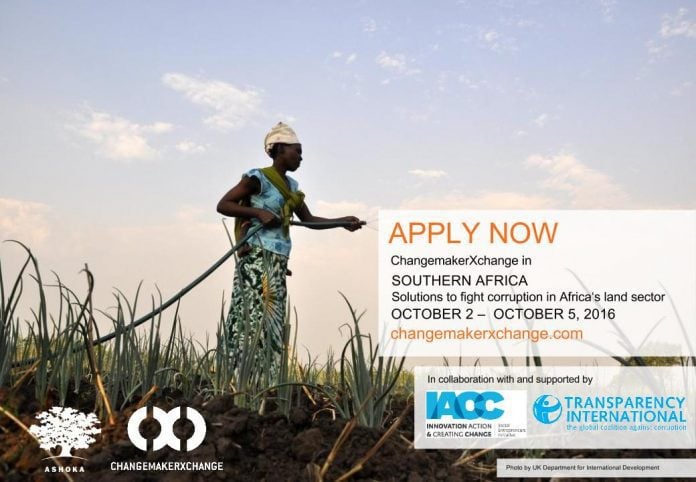 Across Africa, one in every two people needing to access land-related services is affected by corruption. This could be a bribe demanded by a housing official, a dodgy business deal that forces local communities off their land, or a fraud scheme by bogus property developers. This kind of corruption plays out in the public and private sectors and affects rural and urban citizens alike.

For young people, land-related corruption can sap entrepreneurial spirit and restrict access to employment, forcing migration to overcrowded urban centres where competition for jobs is even greater.

To help change this situation, Transparency International has teamed up with Ashoka and the International Anti-Corruption Conference to launch the first ChangemakerXchange in Southern Africa from 2 – 5 October in Johannesburg, South Africa.

Eligibility:
* You need to be aged 18 – 35
* You must live in Angola, Botswana, Lesotho, Malawi, Mozambique, Namibia, South Africa, Swaziland, Zambia or Zimbabwe
* Ashoka welcome social entrepreneurs, intrapreneurs, journalists, bloggers, artists, government employees, and young changemakers from other fields with an interest in anti-corruption. You don’t have to be an existing social entrepreneur to apply – applications are open to anyone in the specified age group from the private or public sectors, civil society or the media.

Examples of the participants could be:
* A social entrepreneur who has a startup fighting corruption
* A journalist
* NGO activist
* Government employee
* Hacktivist
* Business person working in the private sector

1) Read all information here: www.changemakerxchange.com
2) Complete this application form
3) Send the following documents to Amy ([email protected]). Include your first name and surname in the subject line. For example: “Thato Zwane: Southern Africa ChangemakerXchange supporting documents”. Use the same first name and surname that you used in your application form.
*Updated CV (if you don’t have one on your LinkedIn profile)
*Scanned birth certificate OR passport page showing your passport / identity number, date of birth and the country in which you reside.

Visit the Official Webpage of the Transparency International/Ashoka ChangemakerXchange 2016