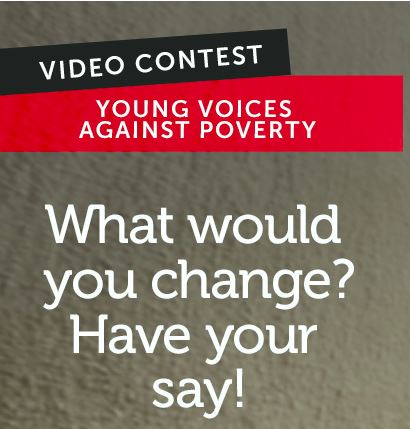 The EDD13 video contest ‘Young voices against poverty’ encourages children and young adults aged between 13 and 24 to make their voices heard in the dialogue on addressing global poverty. The task is to create a short video (120-seconds max.) that showcases visions for the world in 2030 and ideas for eliminating poverty.

There will be four contest winners who will each receive an all-expenses trip to Brussels to attend European Development Days (26-27 November 2013) and have their video screened and made available on the website. The winners will be determined by those videos attracting the highest number of votes on Facebook.

In the run-up to European Development Days 2013 – Europe’s premier forum on development, poverty eradication and sustainable development – we want you to have your say!

All you have to do is make a short video (no more than 120 seconds) answering the following question: If you could have your say, how would you fight poverty?

You could be one of 4 lucky winners to win an all-expenses paid trip to Brussels to attend European Development Days, 26 – 27 November 2013, where your video will be screened. Prizes will be awarded in each of the following

This contest is open to all youth between the ages of 13 and 24 worldwide.

Video entries not submitted in English must be accompanied by a full video transcription in English, which can be provided using Google Translate. Video entries must be received by 23:59 CET on 1 November 2013.

Please refer to the video contest rules below for further information: