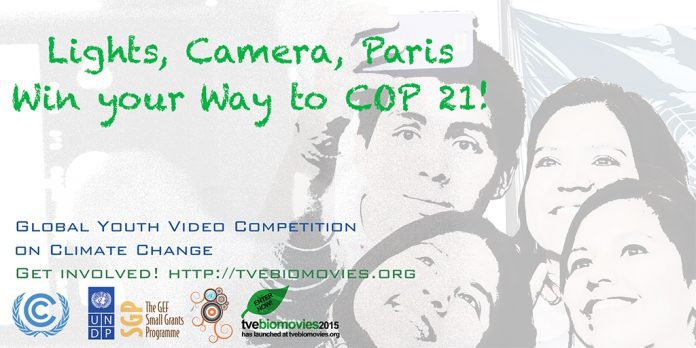 Are you between 18 and 30 and passionate about combating climate change?

The UN Framework Convention on Climate Change has teamed up with tve to launch a video competition for the best youth climate projects happening around the globe.

And the prize for two lucky winners is a trip to the Paris Climate conference in December and the chance to produce daily video blogs and stories for an audience on the web on events, people and activities of interest to young people around the globe.

tvebiomovies is a film competition now in its sixth year, and open to people around the world with access to a camera. Submit a winning film about the action you are taking on climate change and you could win a trip to Paris to report on the Climate Change talks in December.

Alternatively, you could receive US$300 to produce a one-minute film about the environment. Which bit of the environment? Choose a category and decide. Your film could be funny or serious, an animation, a drama or a documentary.

There are two categories for you to choose from. In each one, 3 films would be commissioned t. The completed films will be shown on YouTube and the one in each category which has the most views will win US$1500!

The two categories are:

The winning entries being judged by our panel will take into account the following criteria: