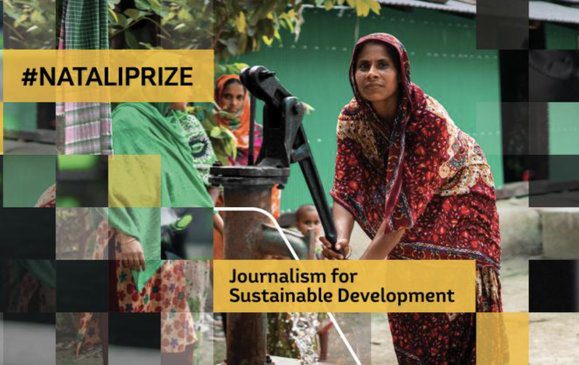 The Lorenzo Natali Media Prize was launched in 1992 to recognise and celebrate excellence in reporting on sustainable development issues. The Prize also gives a voice to those whose vital message is often overlooked or ignored. It was created by DG DEVCO, and named after Lorenzo Natali, a precursor of European development policy.

Themes
The overarching theme of the Lorenzo Natali Media Prize is sustainable development.
Entries to this year’s competition should relate to sustainable development issues such as, but not limited to, fighting poverty and inequalities, human rights, democracy, youth, gender equality, environment and climate change, health, and technology and digital.

Categories
The applicants must choose one of these categories when filling in the online form. The Prize is open to journalists in the following three categories:

Language requirements
English, French and Spanish are the official languages of the Prize. However, we accept all languages as long as a translation in English, French or Spanish is provided. The entries will be evaluated on the basis of translated texts.

Length
For text-based entries, the length limit is 2,300 words. Video and audio entries can be up to 10 minutes long.

Author(s)
Submitted reporting can have one or several authors. The participants must be the authors and holders of the copyright and the moral rights of their work. Plagiarism, which includes the unauthorised use of the language and thoughts of another author and the representation of them as one’s own, will result in disqualification. Retrospective discovery of plagiarism will result in revocation of title of winners.

Prize
There will be up to three winners. Categories will not be awarded if quality is not met. Each winner will receive 10,000€. The winner of the Best Emerging Journalist category will also be offered a work experience opportunity with a media partner.

Use the application form. You will need to upload your reporting (text or audio-visual file) as well as a translation of the work in English, Spanish or French if the original is not in one of these languages.
If you decide to submit your application by e–mail, please email [email protected]: