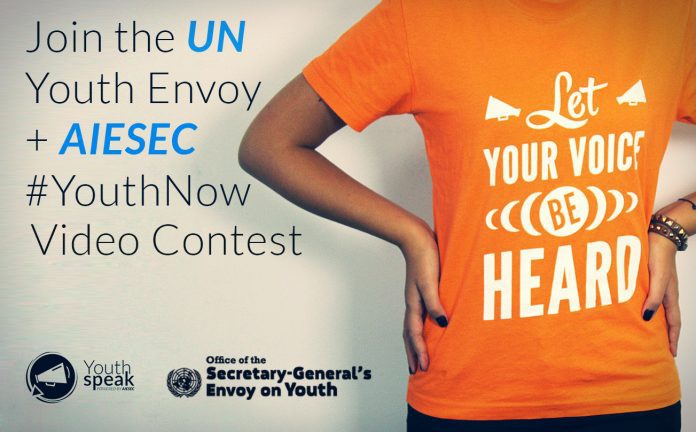 Youth opinion is a priority for the United Nations! AIESEC and the Office of the Secretary-General’s Envoy on Youth are launching a video contest as part of the #YouthNow campaign leading up to the High-Level Event of the General Assembly hosted at the United Nations headquarters in New York City.

Join the contest for a chance to have your video formally featured as part of the digital surge leading up to and during the High-Level Event of the General Assembly hosted at the United Nations headquarters in New York City on 29 May 2015. The event will be attended by over 1,000 people from around the world, including Ministers and youth leaders! Your video can help inform the online conversation and will be tweeted formally from the UN Youth Envoy account.

What you need to answer in a short video [3 minutes maximum]:

1) What are the most critical issues for youth in 2015?
2) Why is youth development central to the global development agenda?
3) What you think a solution(s) could be?

Post your video on any social media platform using the hashtag #YouthNow. The video can also include your personal action(s) or a project(s) to make a positive change for #YouthNow.

Winners will be selected based upon

What’s the process and reward? A selection committee containing representatives from AIESEC and the Office of the United Nations Envoy on Youth will review all videos and pick the top 3 submissions.

Submit Your Video Now for the #YouthNow  Video Contest